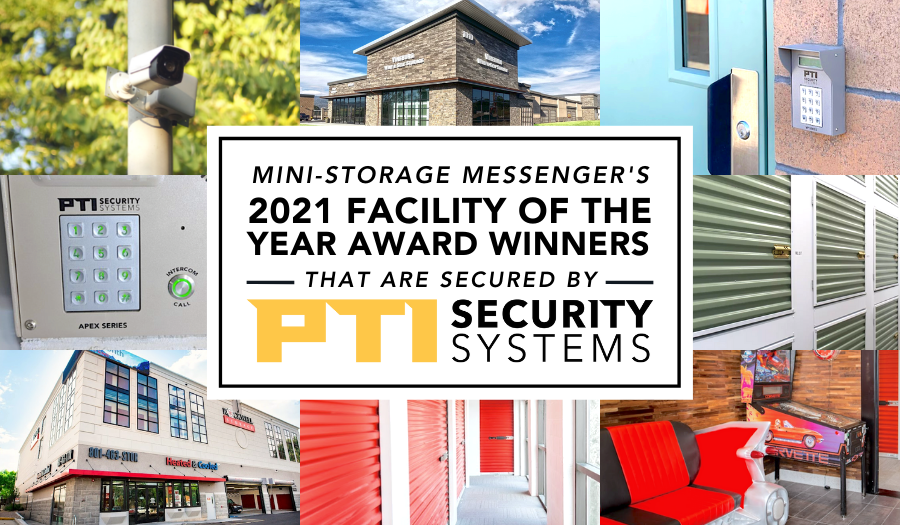 Since 1986, MiniCo Insurance Agency’s publication of the Mini-Storage Messenger has awarded the world’s leading self-storage facilities the prestigious honor of being named a “Facility of the Year.” For over 30 years, this competition has driven the self-storage industry to new heights regarding professionalism, technology, design, and outstanding customer service.

PTI Security Systems is proud to provide two of the five “Facilities of the Year” listed in the 2021 edition, including Vineburg Wine & Self-Storage and Rockwell Storage. 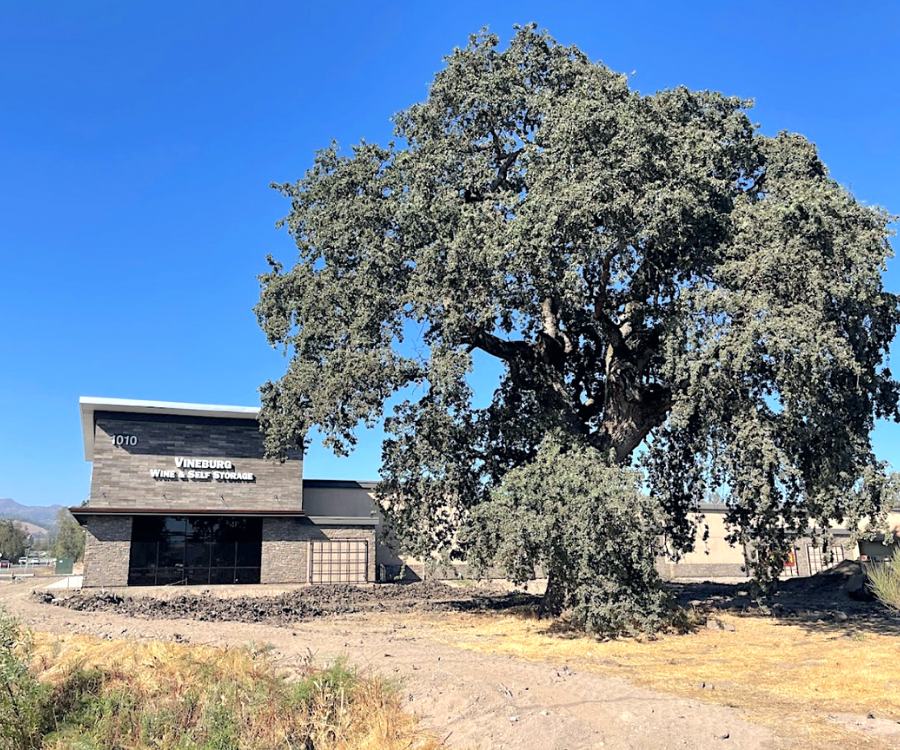 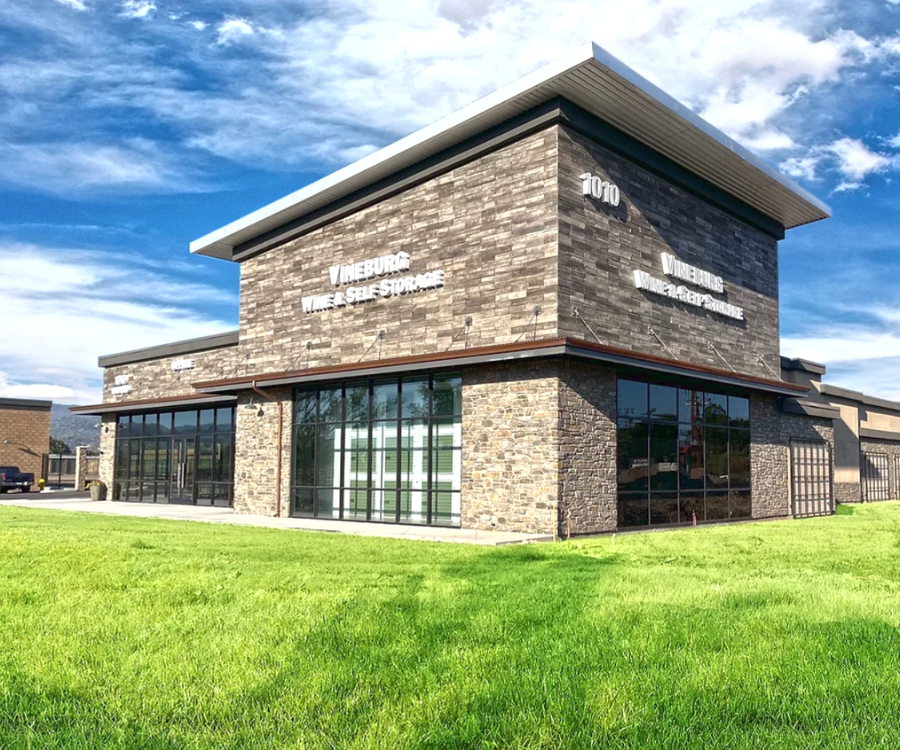 Our story starts a decade ago when Greg Van Cleave, a sheet metal contractor from Sonoma, California, decided to invest in self-storage. However, little did he know the long road of challenges he would face to make this investment a reality.

After years of researching various properties, Van Cleave struggled to find a lot for his facility with the proper zoning, met the correct height requirements, and was located on a busy scenic road into California’s wine country. About six years ago, he finally hit the jackpot when he came across a 6.07-acre lot for sale at the corner of Napa Road and 8th Street East. The road itself is a traffic-heavy intersection between the most famous wineries throughout Sonoma and Napa Valley, averaging an estimated 10,000 cars per day.

Van Cleave attended a self-storage industry trade show in Las Vegas. He hired Jordan Architects to design the project and completed a feasibility study to secure the financing. While his project started with significant momentum, Van Cleave hit his first obstacle when he submitted the design to the county for approval.

Unfortunately, the title company hadn’t picked up a nearly 100-year-old railroad easement, a legally binding agreement between the railroad company and Van Cleave’s property that defined 1.5 acres of land on his recently acquired property. Van Cleave’s attempt to purchase the acreage turned into a lawsuit filed against the title company to vacate the eastern easement, adding a $200,000 price tag and a six-month delay to his project.

After the railroad easement lawsuit, Van Cleave got back to work and focused on design. However, in October 2017, the Tubbs Fire ravaged Northern California, burning 37,000 acres throughout Napa and Sonoma. After destroying at least 5,200 homes, businesses, and structures throughout the area, construction costs for Van Cleave’s self-storage project nearly doubled, as builders and contractors were in high demand to reconstruct the losses. At the time, the Tubbs Fire was the most destructive wildfire in California history.

When winter hit in early 2018, local rains flooded the site. As a result of the flooding, the California State Water Board demanded that an established waterway be relocated on the property. California, known for its strict environmental standards, also required mitigation of all the plants from the original waterway bank. The process of protecting the plants from the waterway bank exposed a series of previously undiscovered wetlands on the property, another issue that required mitigation. After mitigating the railroad easement, relocating the waterway bank, and the wetlands on his property, Van Cleave’s contractors then discovered the water table was found to be higher than initially estimated. The discovery would result in the entire site having to be raised by a foot, and although it doesn’t seem like much, it took 550 trucks and trailers loads of dirt to raise the water table just 12 inches.

While one might assume that Van Cleave had already mitigated enough to appease the state and county standards, the costliest environmental mitigation was initiated by Van Cleave himself. Since purchasing the 6.07-acre lot, Van Cleave had admired an enormous oak tree on the property. Out of curiosity, he contacted an arbor expert to date the tree, estimated to be around 340 years old. Although protecting the tree would require Van Cleave to redesign and move the site’s retention basin, Van Cleave felt compelled to save the tree. So, Van Cleave went with his gut and faced the cost and construction delays that accompanied the relocation of the site’s retention pond. After the retention pond was moved and the tree saved, the project was further delayed by discovering a nest in the oak tree that belonged to an endangered bird species. Thus, construction was halted and only approved to proceed after nesting season.

After the nesting season, in March 2020, the global COVID-19 pandemic shut down the site’s construction, as the project wasn’t deemed essential. Once they got the green light to continue building, Van Cleave’s project suffered several more delays from supply chain shortages and workers contracting COVID. In all, the project exceeded Van Cleave’s initial budget by about $8 million.

However, after nearly three years of setbacks, Vineberg was finally able to begin operations in August 2021. The finished product perfectly encapsulates the romance of the wine country while simultaneously giving customers a secure feel of a modern storage facility complete with a fully integrated PTI access control security system installed by Mid Valley Alarm. Van Cleave opted to offer Vineburg Wine and Storage tenants the highest level of individualized door security in the self-storage industry by installing DoorBoss wireless smart locks throughout. Now a thriving business, Vineburg sits at 39 percent occupied and is set to begin planning a second expansion with the current design team and builders soon. 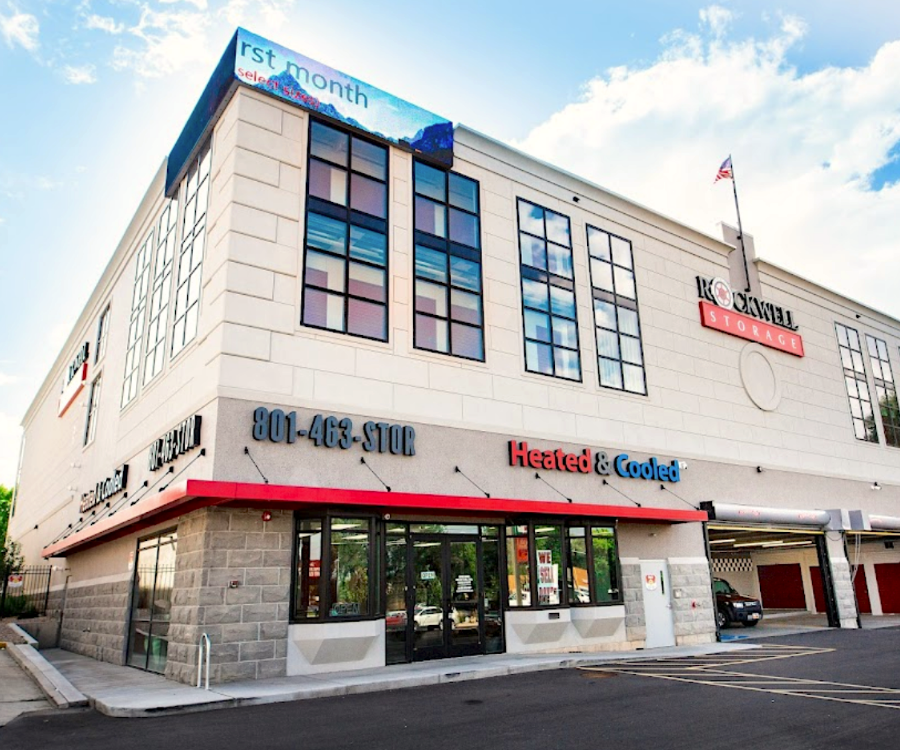 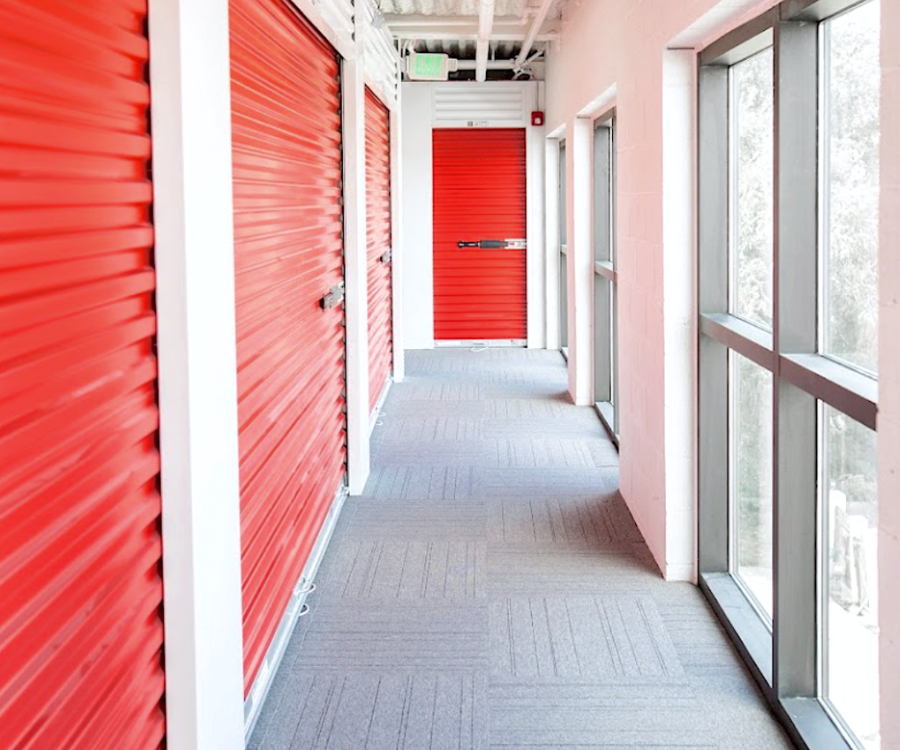 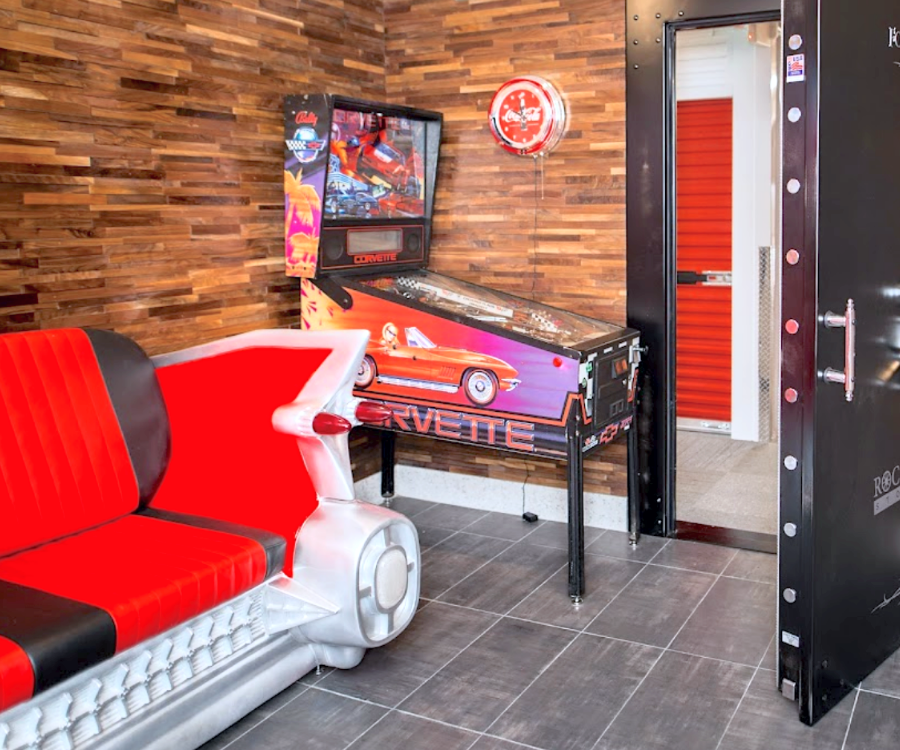 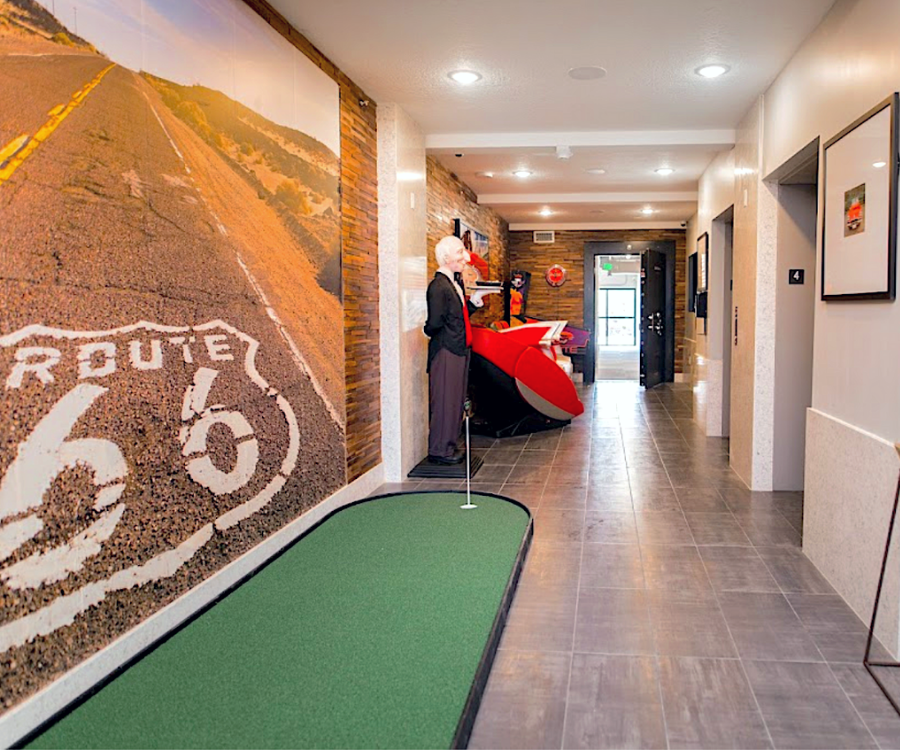 James Mitton is no stranger to self-storage. In fact, he has been developing and building self-storage since 1999. Mitton is known for creating the prosperous King Arthur Storage, a medieval-themed facility in Jordan, Utah, thriving since its inception in 2006.

With the success of his original medieval-themed storage facility, Mitton set out to construct his next idea – a Route 66 car theme on a small piece of property on one of the busiest intersections in South Salt Lake. Like any new project, Mitton knew this would take five to six years to complete, but he had no idea the obstacles he would face to make this dream a reality.

His first challenge began after he purchased the land and discovered that another self-storage facility had already been approved two buildings away and was a year into its construction phase. With such heavy competition, Mitton knew he would have to design and build something unique. He called upon his friends at Vincent Design Group, Inc., and Menlove Construction, two Salt Lake City-based businesses that he had previously worked with on his other projects, and got to work.

Unfortunately, as the teams collaborated, the city discouraged the project at every turn. For example, Mitton determined that for the project to be economically viable, it would require the facility to feature at least four stories of rentable space. Once he submitted his initial four-story building with a clock tower design to the city, the city imposed a three-story grade height limitation on Mitton. Once the architects cut five feet from the plan, a group of nearby residents filed a complaint that self-storage tenants on the upper floors of Mitton’s facility would have a full view of their private property. Thus, the team designed specialty opaque windows for that side of the building.

Mitton’s next challenge came when the city mandated that the building be completely fireproof, an arduous task when trying to keep the facility esthetically pleasing for the neighboring residents.

Once the project broke ground, the biggest challenge Mitton’s team faced was due to the small size of the property site. Because there wasn’t enough room for a construction crew to work diligently, Ken Menlove, president of Menlove Construction, had to coordinate with the neighboring 7-11 gas station to schedule trade crews to come in one at a time. While the 7-11 was extremely cooperative, the winter weather of Mill Creek, Utah, was not. Several winter snow days threw off the trade crew schedule, pushing the completion further and further from its initial projection.

Despite the enormous efforts required to make the exterior of his facility functional, Mitton knew the design of the property’s interior held just as much significance. Mitton wanted to bring a classic car, Route 66 theme and feel to the facility. Outside there’s a classic ’57 red and white Corvette convertible that’s used to draw in customers. Inside, a wall displays original license plates from all 50 states and an old-fashioned gas pump.

While the classic car theme continues throughout the new facility, the fourth floor is where it races to the finish line. In addition to paintings and photos of classic Corvettes, the top floor of Rockwell Storage features a working Corvette-themed pinball machine, a putting green, leather massage chairs, and a statue of a butler that offers refreshments to customers. All the units on the fourth floor are carpeted and finished.

But Rockwell Storage isn’t all about classic corvettes and exciting things to do. First and foremost, Mitton builds all of his facilities with a high level of security. With some help from our friends at Security Plus in Chino, California, James implemented the highest level of security features available to the self-storage industry for the tenants of Rockwell Storage.

By installing a fully integrated PTI access control security system, Security Plus equipped Rockwell Storage with a top-of-the-line PTI access control keypad system with a four-line display that allows tenants to enter the front door and first floor. Security Plus additionally implemented elevator keypads to Rockwell’s hospital-sized elevators to control tenant access to specific floors of the facility. Next, they equipped each unit at Rockwell Storage with an individual door alarm. Finally, they installed PTI’s wireless smart lock, DoorBoss, to each unit on the fourth floor for an extra layer of security.

After their grand opening in September 2020, Rockwell Storage has managed to entice the residents of Mill Creek with a unique self-storage tenant experience. It is currently 84 percent occupied, and they expect the facility to be at 94 percent leased in the next 12 months.

To learn more about the winners of the Mini-Storage Messenger’s 2021 Facility Of The Year Awards, visit www.ministoragemessenger.com.