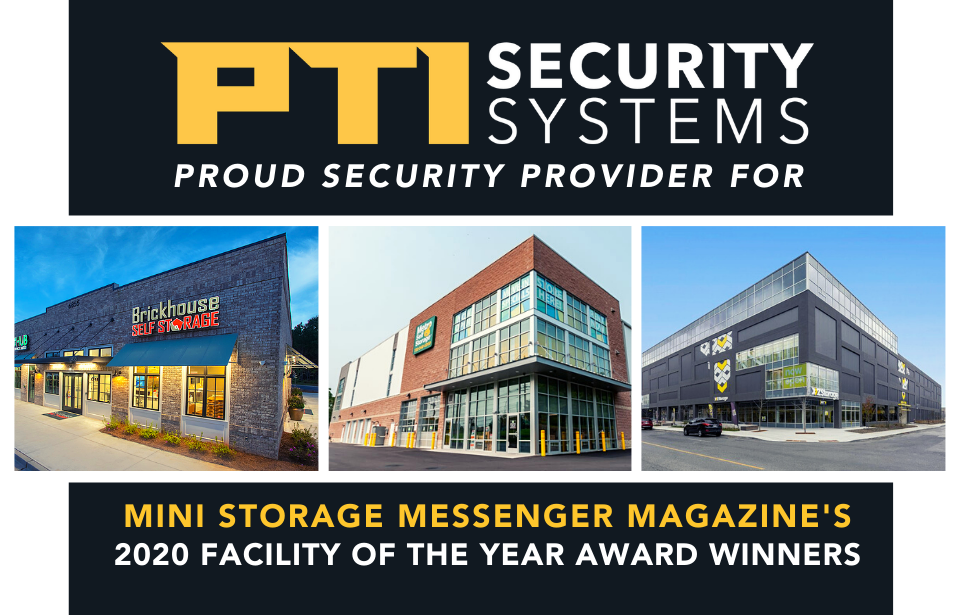 Since 1986, MiniCo Insurance Agency’s publication of the Mini-Storage Messenger has awarded the world’s leading self-storage facilities with the prestigious honor of being named a “Facility of the Year”. For over 30 years, this competition has driven the self-storage industry to new heights regarding professionalism, technology, design, and outstanding customer service.

PTI Security Systems is proud to be the security provider for three of the five “Facilities of the Year” listed in the 2020 edition, including:

In 2017, Dr. Thomas Humber and his partner, Glen Howell, decided they wanted to develop a self-storage facility in their affluent town of Senoia, Georgia. After conducting a feasibility  study they found that while the average household income was viable for self-storage, there wasn’t enough traffic within the area to justify the $4.5 million project.

As the filming location of the acclaimed series “The Walking Dead,” Humber had a hunch that his city would experience rapid growth within the coming years. He and Howell refused to give up on their idea and continued trying to find a way to bring their self-storage project to life. After countless research, Humber came across the Atlanta-based Universal Storage Group.

Universal Storage Group (USG) is one of the industry’s leaders in management, consulting, training, and developmental services, continuously listed among the top in the country. USG put Humber and Howell in touch with Benjamin Showalter, an architect at Showalter Architects in nearby Peachtree City, Georgia, and the project began to take life.

The facility was designed with incubator offices and office warehouse suites that allow commercial customers to have office space with an adjoining warehouse to store their inventory. They also developed a state-of-the-art conference center and a beautiful sales office with retail space to sell packing supplies. After the retail space was designed, they began planning the self-storage facility behind the retail mall.

Everything was set to go for the team to break ground, but the project hit several obstacles along the way. After a battle with the city to gain approval to move their septic tank to the city’s sewer system, the project faced another hurdle when the construction team hit rock after breaking ground on the project. Blasting out the stone for proper sewer construction cost an unplanned $144,000. Unfortunately, the project hit another setback throughout its construction as the cost of steel increased 20 percent. This influx caused the project to go over budget by approximately $200,000.

Despite the hurdles along the way, the self-storage developers put a lot of thought into every detail — especially the security. Our partners at Access Control Technologies put the finishing touches on this $4.5 million project by installing a state-of-the-art PTI access control security system, complete with EasyCode for tenant mobile-accessibility. Recent data shows 40 to 45 percent of self-storage customers visit their unit monthly, making the no-contact mobile entry more paramount during the COVID-19 pandemic.

Since its grand opening in May 2020, over 70 percent of Brickhouse Self-Storage is leased. And thanks to the surprising success of Phase I, Humber and Howell are starting Phase II of their project, which will include 44,000 more square feet in a 220-by-220 square foot building with a mix of climate-controlled and non-climate-controlled units. What a success story! 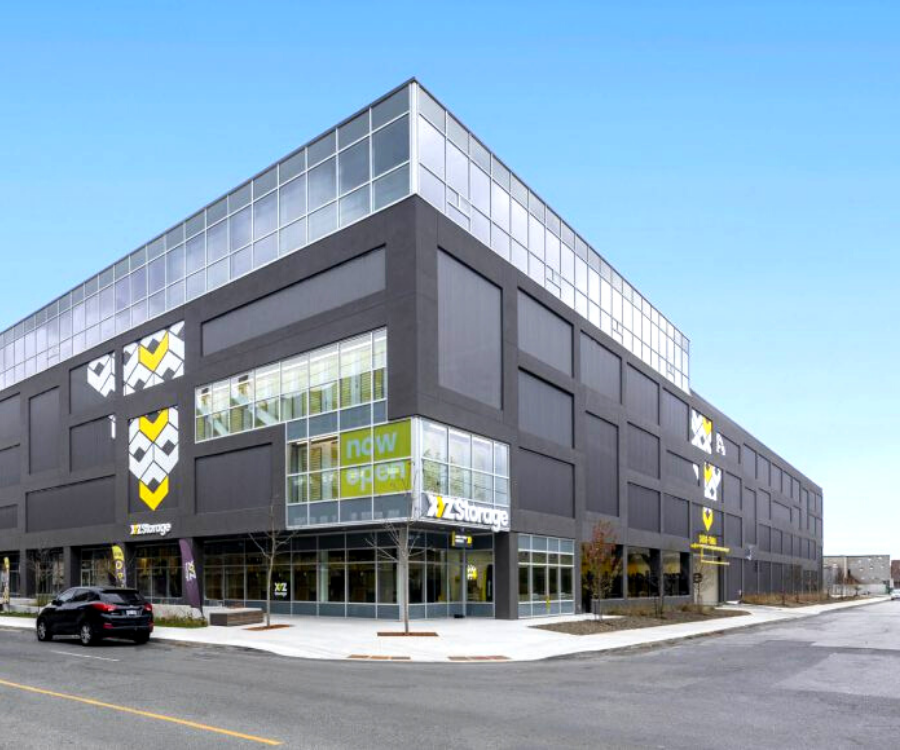 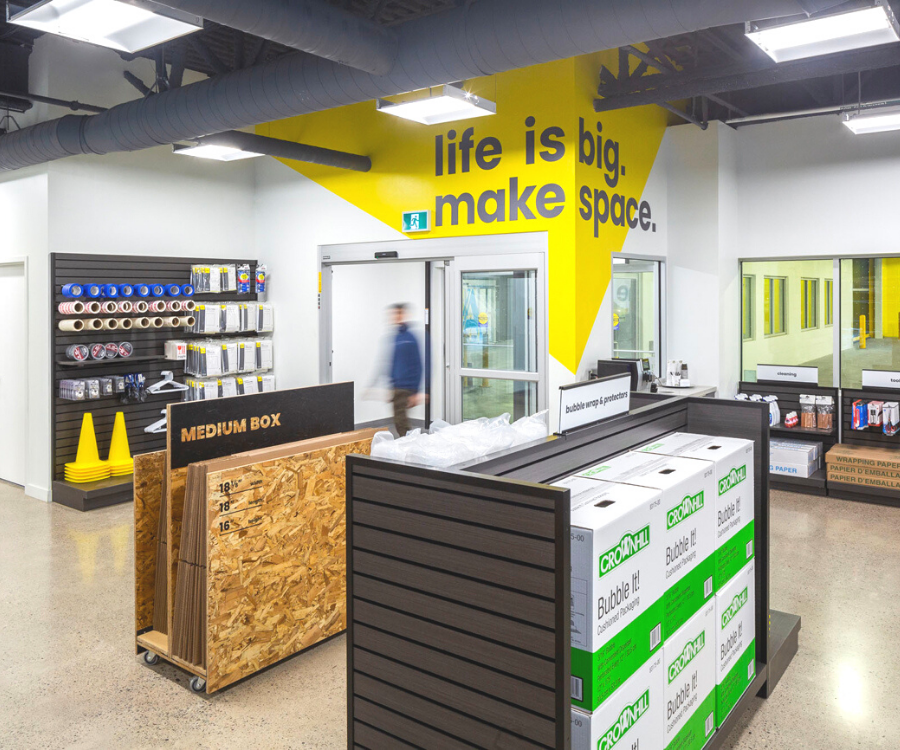 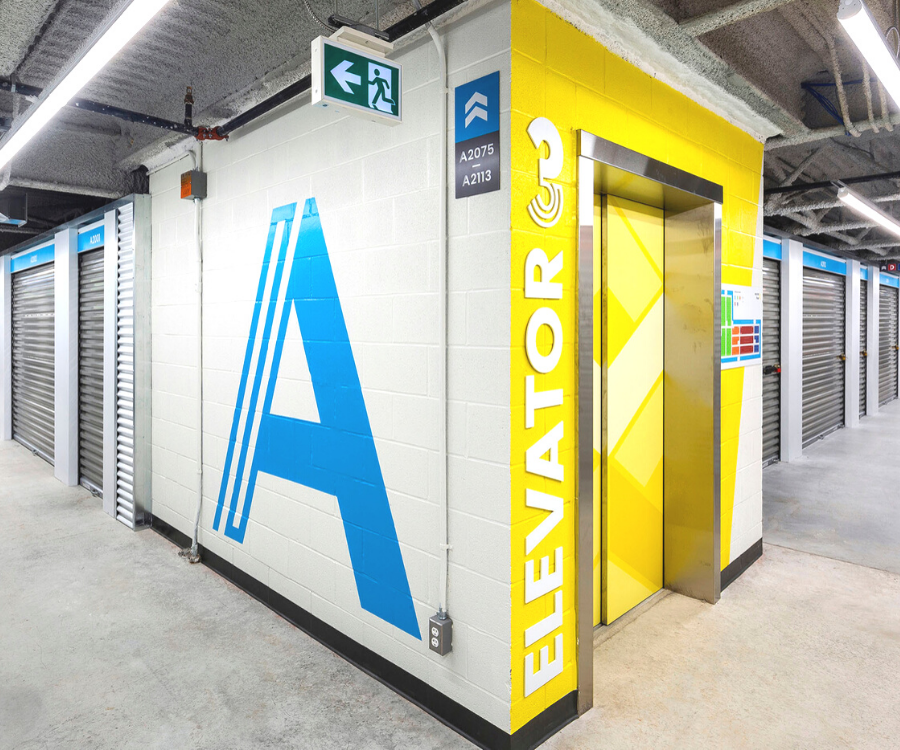 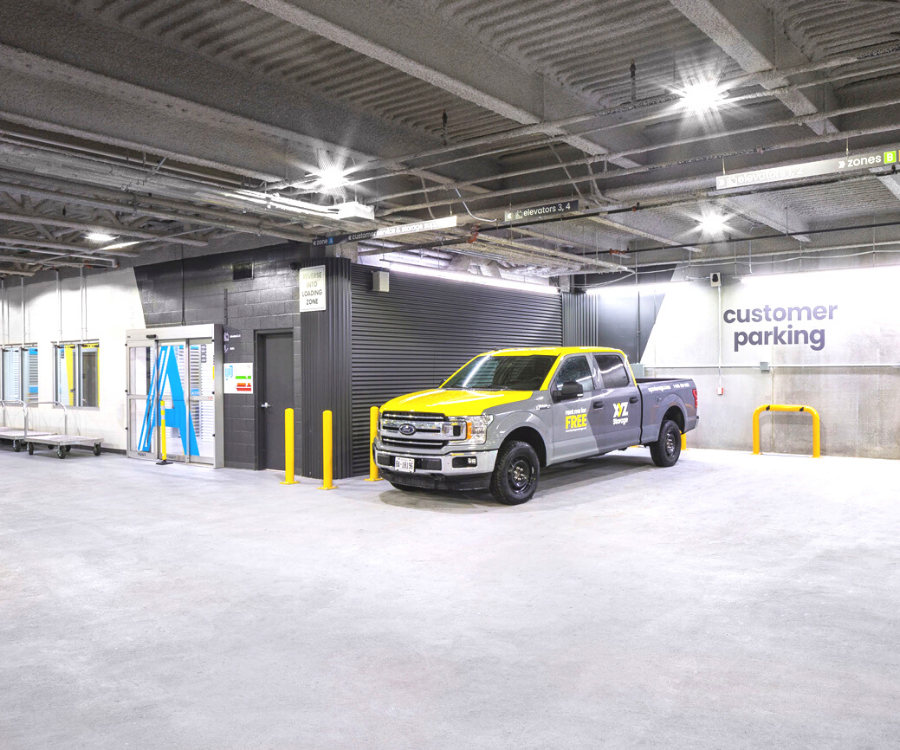 Just a few blocks from downtown Toronto, Canada, sits a five-story building with all the bells and whistles of an award-winning self-storage property. XYZ Storage, formerly known as All Canadian Self-Storage, rightfully earned the prestigious title of MSM’s International Facility of the Year after nearly five years of obstacles.

The property was constructed on 1.5 acres of premium real-estate overlooking the Toronto skyline after John Donald and Hal Spradling, founders of All Canadian Self-Storage, purchased the land that was the parking lot for a former bakery. After buying the property, the city of Toronto saw a substantial real estate boom. Rather than sell the land for two to three times what they paid, Donald and Spradling kept the land for its unique location and proximity to downtown.

Spradling drew up his vision of the property and hired Rick Brown, president and a designer with Rick Brown and Associates, and J.H. Rust Architect to bring his vision to life. By February 2016, the consultants, architects, and industry professionals had a preliminary design completed.

Spradling’s vision featured a full drive-thru facility where tenants would directly access units from their vehicles. This vision proved challenging, as the property’s long L-shape made access to the main street difficult. To add to the hurdle, the drive-thru only design had to meet Toronto’s strict fire codes.

Adhering to codes was just the beginning of a very long and arduous approval process from the city and ended up being a lengthy construction process. From zoning bylaws, including height limits, required parking, and gross floor area, a new hurdle seemed to present itself at every turn. After the numerous uphill battles, XYZ Storage’s conditional site plan approval finally came in February 2018.

Bond Securcom Inc. installed a fully integrated PTI access control security system for XYZ Storage. In addition to installing PTI access control keypads, XYZ Storage installed DoorBoss smart locks on their 1,592 units for individualized unit monitoring. With the implementation of smart locks and keypads, Bond Securcom Inc. helped XYZ Storage the EasyCode mobile app for mobile accessibility. This feature has kept both employees and customers safe during the coronavirus pandemic. According to XYZ’s cloud-based software, more than 50 percent of rentals have been contactless this year.

Five years after purchasing the land, XYZ Storage – Eastern opened in October of 2019. Despite it being a challenging year, XYZ – Eastern has managed to attain 61 percent occupancy and is expected to be at 85 percent lease-up by the end of 2022. 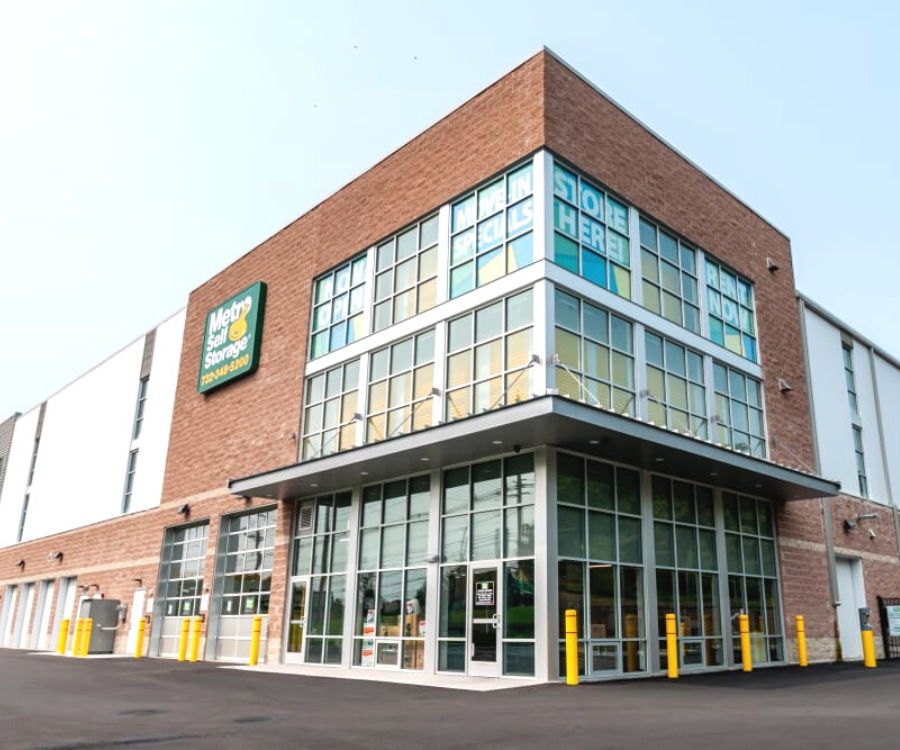 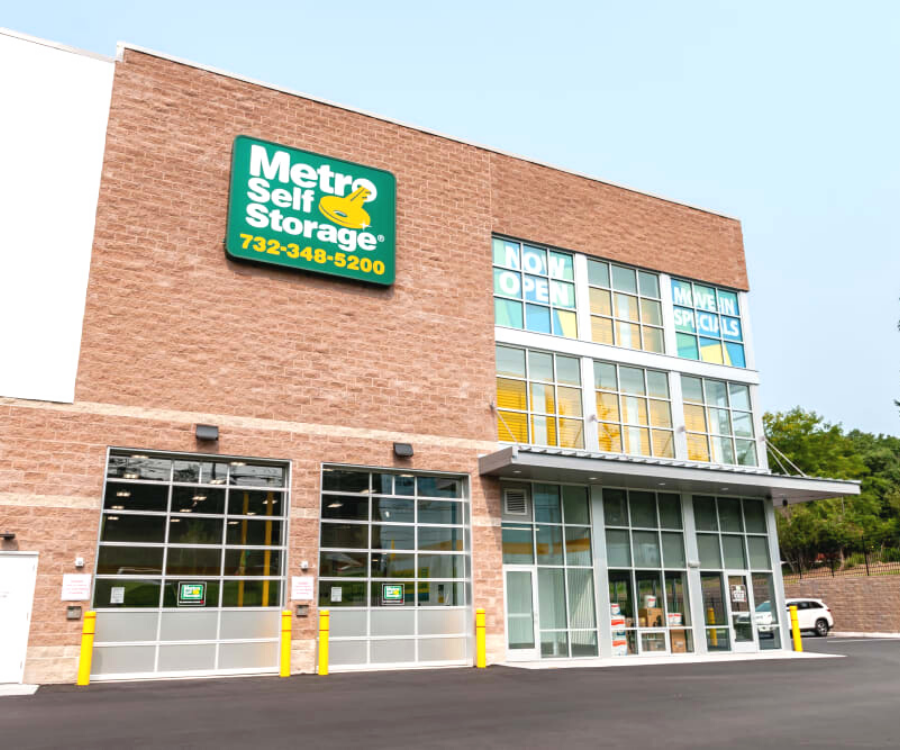 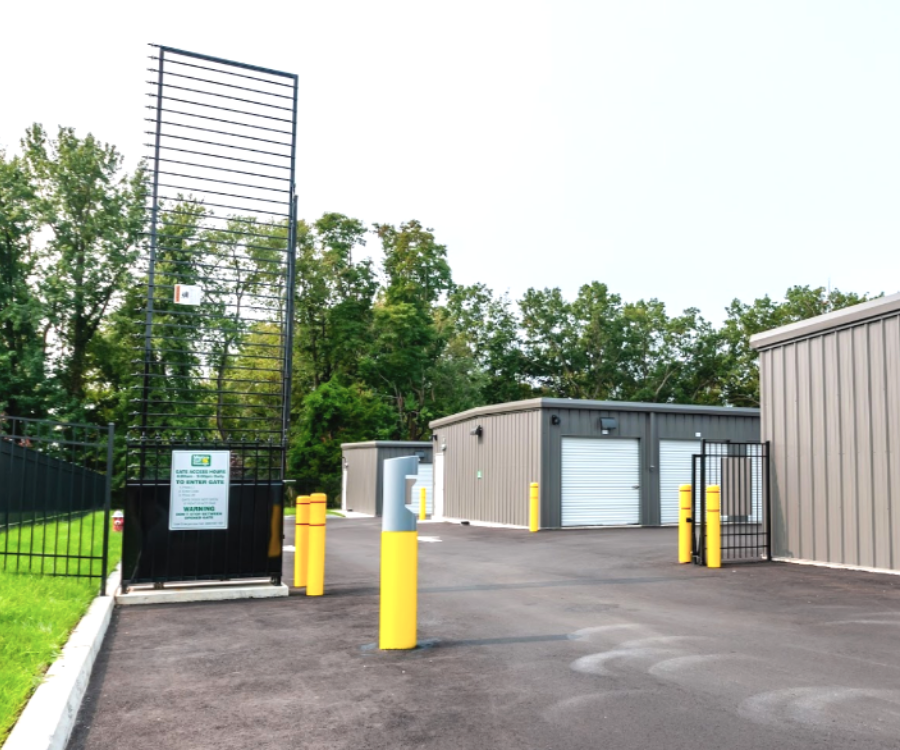 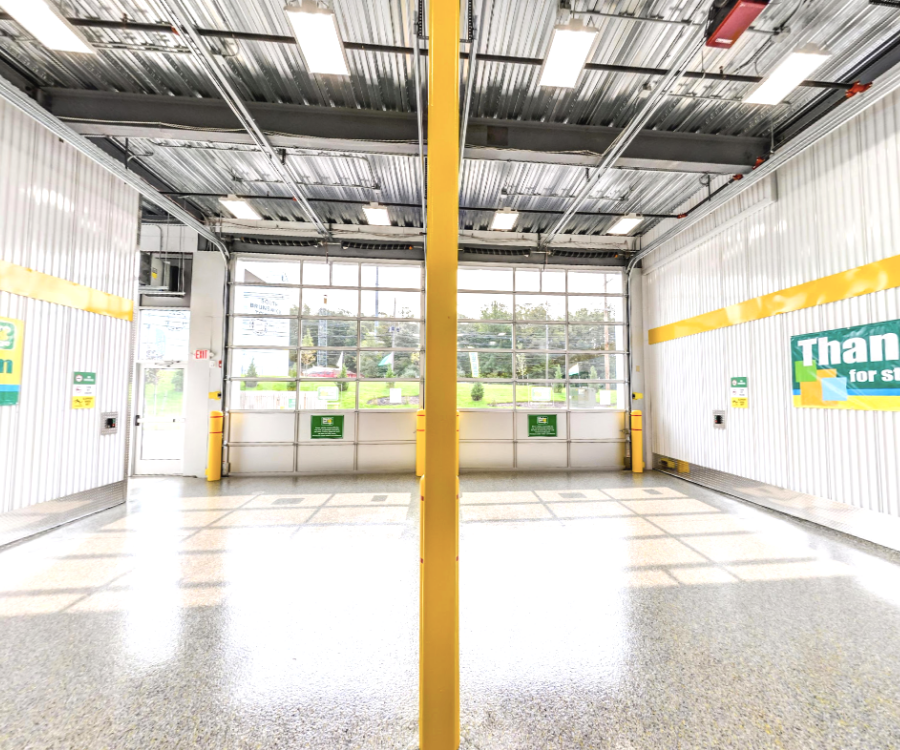 With a large population density, high median income, and robust traffic levels, South Brunswick, New Jersey, seems like the perfect location for a thriving self-storage facility. About 30 miles from lower Manhattan, New York, the South Brunswick Township is a part of the New York City metroplex.

Despite having the perfect location, the Metro Self Storage team was given a handful of challenges to overcome – starting with the land itself. A large ravine that bisected the property required regrading to create a sufficiently large plateau. While constructing a plateau over the ravine, civil engineers discovered that more than 50 percent of the 21-acre site consisted of protected wetlands, mandating a barrier separating the natural area from the portion Metro Self Storage was trying to develop. While the addition of a retaining wall could separate the wetlands from the property’s construction, local code required the construction of a retention basin to collect stormwater runoff.

After planning the construction of the plateau, retaining wall, and basin, Metro Self-Storage was then faced with a devastating blow; the township’s board of zoning appeals did not allow for the land to be used for self-storage. Through a series of lengthy negotiations, Metro Self Storage finally obtained a variance from the township board. Between the ravine, building the plateau, the basin, gaining use approval, and getting the zoning variances, it took a total of two years before Metro Self-Storage could break ground on the construction of their new facility.

But then, one final surprise emerged. Soon after excavation began, contractors uncovered a buried cache of jersey barriers. Popular in the 1950s, jersey barriers are movable concrete partitions used by road crews to separate traffic lanes during construction. Despite having been told to expect some barriers, Metro officials were shocked to discover far more than anticipated. In the end, the site had to be severely undercut to remove the barriers. After removing the barriers, the contractor crushed and ground them for use as structural fill. Effective coordination between the site contactor and Metro’s construction superintendent mitigated delays and kept the project on schedule.

Despite wanting to remain mindful of the additional costs they were faced with, Metro Storage was unwilling to cut corners when designing to their customer experience. Metro Storage selected a PTI access control security system featuring premier keypads with integrated intercoms for their South Brunswick beauty. The software allows tenants access only to the facility’s area where their unit is located, and the intercom feature provides for voice communication with the office to field customer questions.

After their grand opening in July 2020, the new South Brunswick location exceeded the company’s three-month occupancy goal, reaching a rate of 17.4 percent by October. Metro officials expect full occupancy to be reached in about two years. We are proud to support Metro Self Storage in their mission to create a safe and secure facility for their tenants while ensuring a best-in-class customer experience!

To learn more about the winners of the MiniStorage Messenger’s 2020 Facility Of The Year Awards, visit www.ministoragemessenger.com.